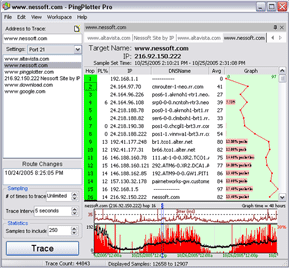 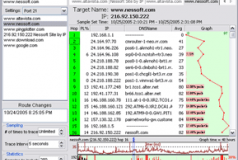 · PingPlotter now supports TCP traceroute, in addition to UDP and ICMP. This allows additional options in tracing to a site that's using a firewall blocking UDP and ICMP. For this release, TCP is supported under Windows 2000, XP and 2003 only. For users of Windows XP SP2 (which blocks the sending of TCP raw sockets), we support the use of WinPcap to create the TCP packets. · New "Getting started" screen with links to help content. · Significant improvements in ability to run as a non-administrative user. Admin user can set default setups and non-admin users "inherit" those settings, but then have their own setups (stored in their local profiles). You still need to be an administrator to install PingPlotter, though. · All new options dialog that includes new features for version 2.60, in addition to having a more intuitive layout and "look and feel". · When an alert is triggered on a specific hop, that hop shows an indicator, with a float-over hint of which alert is firing. · Selecting a hop in the upper graph highlights it in the time graph (if it's shown there). · Alert email body text can be customized (a huge benefit for alerting to a mobile phone / SMS / etc, where the current alert message is too long). · You can now enter a time as a "Samples to Include". PingPlotter will try and calculate how many samples will equal that time period. Example: enter "30" minutes. If you have a 2.5 second trace interval, PingPlotter will convert this to 720. · PingPlotter now tells you about new versions with a dialog with options to supress, rather than just showing that an update is available on the status bar. · Changed the way packet queuing works on all packet types to reduce the number of "extra" packets that get sent out after the final destination is reached. · Interhop delay setting is now honored more rigorously (especially on UDP and TCP types). · When PingPlotter was running, rebooting was sometimes blocked until PingPlotter was closed. · Float-over hints sometimes got cut off - they now make themselves fit onto the screen · Right-clicking a time-graph in the label regions didn't pop up the menu. Fixed. · Testing an alert email now pulls in the current final destination to flush out email body · Changing "Max samples to hold in memory" from a non-zero to all (0) would delete all samples in memory. · On multi-monitor systems, if PingPlotter was closed while visible on a secondary monitor, and then restarted with that monitor disabled, it would be shown off-screen. This has been corrected. · Applying changes in the options dialog now saves the configuration immediately, rather than waiting till PingPlotter is closed next. · Misc tweaks / tidbits.